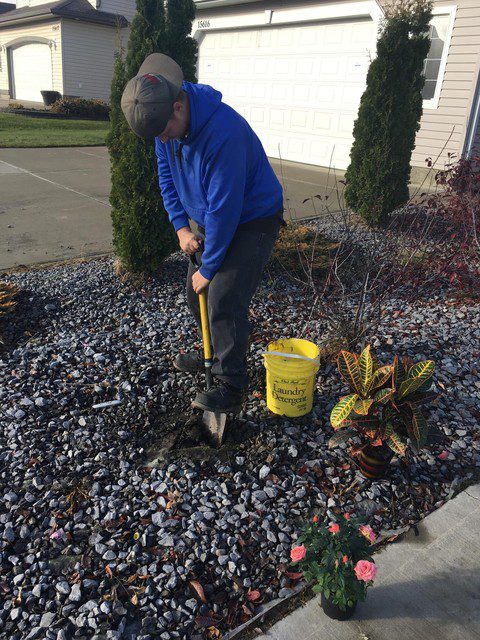 Tamara Konopelky, owner of Green Thumb Landscaping, was at a business networking event the first time she heard about Entrust. Tamara met Rory LaRocque-Walker, director of Entrust’s Framework for Life Program, at her BNI meeting.

Rory was doing a presentation on meaningful employment when a statistic caught Tamara’s attention. “I think I remember him saying something like less than 25 percent of employers had hired someone with a disability,” says Tamara. “I was shocked to learn of the unemployment rate [for people with disabilities].”

Almost immediately Tamara thought of “about 100 things someone from the program could do” in her landscaping business; she decided to contact Entrust. “The whole process was really easy. I called Rory, told him what I needed and he selected a few guys he thought would be a good match based on their disabilities and capabilities,” explains Tamara. “I was invited to their office where I met them and their aids. It was a good match.”

“They are so eager to come to work and help out, and so proud to be there. “They bring so much life to the site. It’s been good for our employees; as soon as they show up everyone is happier. I don’t know how to explain it, they just light things up.”

Although Tamara has had a great experience with Entrust, she admits she originally had misconceptions about hiring someone with a disability. “I had never even considered it. In our business there’s a lot of heavy machinery. We usually hire people who can drive, so I didn’t think it was even an option for us. I didn’t know we could hire on an as-needed basis either. I think more employers need to be aware this is an option.”

Tamara wants other employers to know you don’t have to open a full-time position to hire through Entrust and recommends they talk to someone who has hired through Entrust before.

“Hiring a person with a disability is a minor change for an employer, but it’s a major change for the employee. You will make a major difference in someone’s life.”

For more information about hiring an employee through Entrust, contact us.

October is National Disability Employment Awareness Month (NDEAM) in Canada. NDEAM aims to increase awareness about the positive outcomes that come from hiring persons with disabilities. According to NDEAM, only about 16 percent of Canada’s working population is living with a disability.

Next: A Solution for Two Sisters