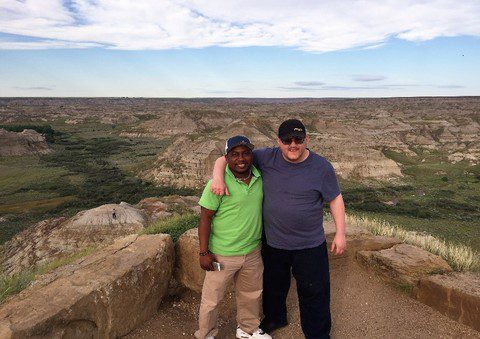 JW and his friend in Dinosaur Provincial Park!

We all need a break from our daily routines every now and then. This summer Entrust client JW enjoyed a nice break from his daily life during a camping trip to Dinosaur Provincial Park (located about two-and-a-half hours southeast of Calgary).

JW, one of his good friends and a few Entrust staff members made the four-and-a-half-hour journey from Edmonton to the park. JW said it was a long drive, but it was totally worth it.

When the group arrived at the campsite, there was just enough time to set up tents and cook smokies for dinner before it started to rain. That night, it rained so hard the bottom of JW’s tent was like a waterbed because so much water had pooled underneath it. Luckily everyone managed to stay dry!

After a good night’s sleep and a pancake breakfast, the group set out for a hike through the badlands. It wasn’t long before they left the main trail to venture onto side trails in search of new challenges. They found that each new challenge led to a rewarding view. JW couldn’t get enough exploring — he climbed to the top of four hoodoos!

JW felt a great sense of accomplishment. His hiking experience left him wanting to become more active so he can conquer more hiking trails in the future.

That day the temperature reached almost 30 degrees Celsius. JW really wanted to cool off, so he convinced one of the staff members to join him for a dip in the muddy Red Deer River. The river was swift, but they stayed close to the bank where it was just deep enough to cool off.

Overall, JW’s camping trip was a huge success — he had a great time and is already talking about his next one!

Previous: A Social Success for Sado!

Next: Success is Routine for WD!